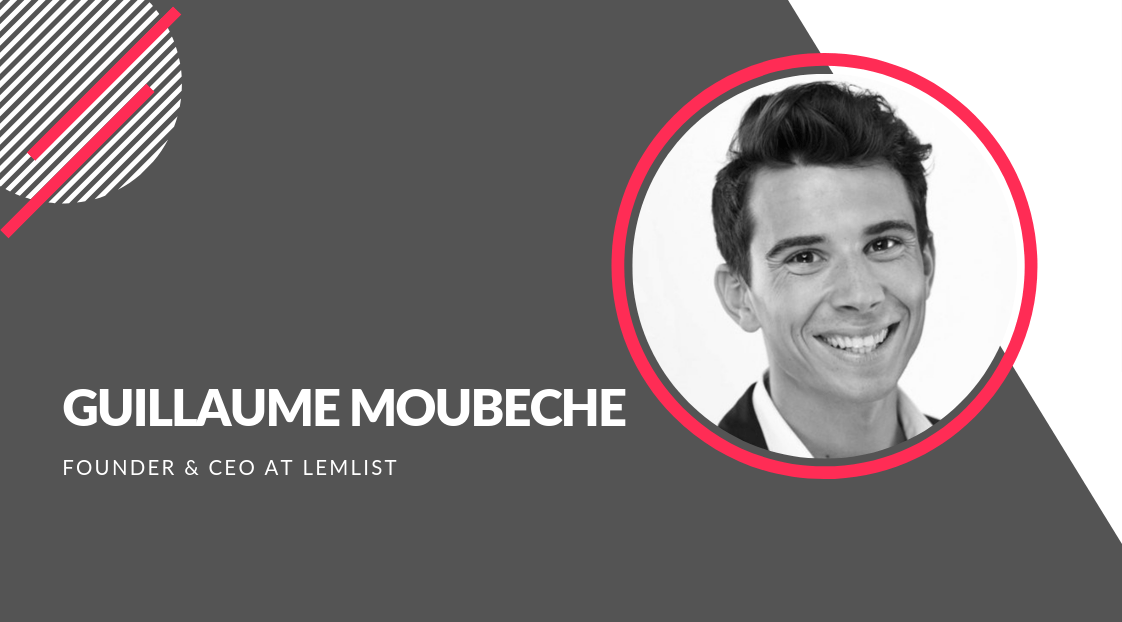 – I know you were studying chemistry. How have you turned into a marketing and sales specialist?

G: Essentially, my parents always wanted me to study science. And I like science. I studied chemistry because I was to do research in drug discovery. After a while, I worked for a company Procter & Gamble, where I was doing half research development and half marketing. I also worked for a French company called Hermes.

Eventually, I decided to sell my share and launch Lemlist. When I was looking at all the tools on the market, I figured out that there are no tools offering the high level of personalization. When you want to do the outreach, it is really acentral and you need to personalize as much as possible. And when I was looking at all the tools out there, I was actually very disappointed. I used all the accurate competitors and I knew them really well. That’s why I decided to launch something new. We started to work on Lemlist and it’s been a great adventure so far.

– Did you have the aim of starting this business when you were a student?

G: To be honest when I was studying chemistry and engineering especially, I knew that I want to start my own business. I didn’t know if it was going to be in sales or marketing or in stuff like that. I was doing my last year master’s in chemical engineering and I was actually awarded like top projects for some entrepreneurship. So we did all the market research, prototyping and things like that. But actually we all decided to go separate ways, and that’s actually when I started to study marketing. I met someone, who I co-founded an agency with.

– Lemlist is the first service that can personalize emails with images and videos. How have you invented this idea?

G: Yes, essentially when I add my agency, I was testing tons of emailsю I think that’s kind of my science mindset which is all about testing everything. So I was running like hundreds of experiments for clients, and at some point I started like adding images with logos in it and trying to personalize as much as possible.

So we add data research board gathering all the data and doing all the cobase together, but it costed a lot of time. But the results were actually great. Every time we were putting video or person id we had 2 or 3-times increase in response rates and we like “Is that huge?”. In the end, there is no such platform providing this type of features.

And I thought like “it’s such a shame, we should be able to automate that”. And based on testing I realized this thing is working and I decided to implement it. And it is actually more or less the same of what we are doing whenever we are giving new templates to our users.

We test a lot of different variations. When it works we just put it to the masses and say “guys, use it. It makes difference”.

– Have you ever used some investments?

G: No, never. We started with almost nothing and got our first paying clients very quickly. And from there, we are supported only by investors and customers.

– And are you going to invest?

G: No, no. We have actually a lot of investors asking like “guys, what do you want? you should raise money” and so on. But actually we don’t want to. You know, when you have enough money in the bank, you’ve got the freedom. And the freedom comes with a price and we don’t want to sell it.

– That’s true. Tell me about the biggest problems at the very beginning. What was the hardest for you?

G: I think for us one of the biggest problem initially was about the industry in which we ran. It was really crowded. There are a lot of products already on the market. It was not about creating a new market. Because the market is there. The products also are there. We had to catch up on all the people’s expectations.

When you launch a product no one ever launched, there are no much expectations. It does what it does and people are happy to pay for it. But in our case, it’s like “Yeh, you have some great features, but you are lacking in this and this”. Initially, it was rather difficult. Then we started selling on the outcome, instead of just the features. It was like “despite our product lacking in this and this, it will get you more replies. Just test it.”

And when people started testing it, they were like “yeah, it’s missing one-two features from competitors, but your unique features are such a big difference share. We just want to go with you, guys”. And based on that it started to grow quickly because my co-founders are very good at tech. But initially I would say, yes, the biggest problem was catching up on the market.

G: We are getting close to half a million and expecting to be $1 million by 2020. Early 2020. Because our gross rate is between 25 and 30% month over month. We are growing very quickly. And that doesn’t count any enterprise accounts. 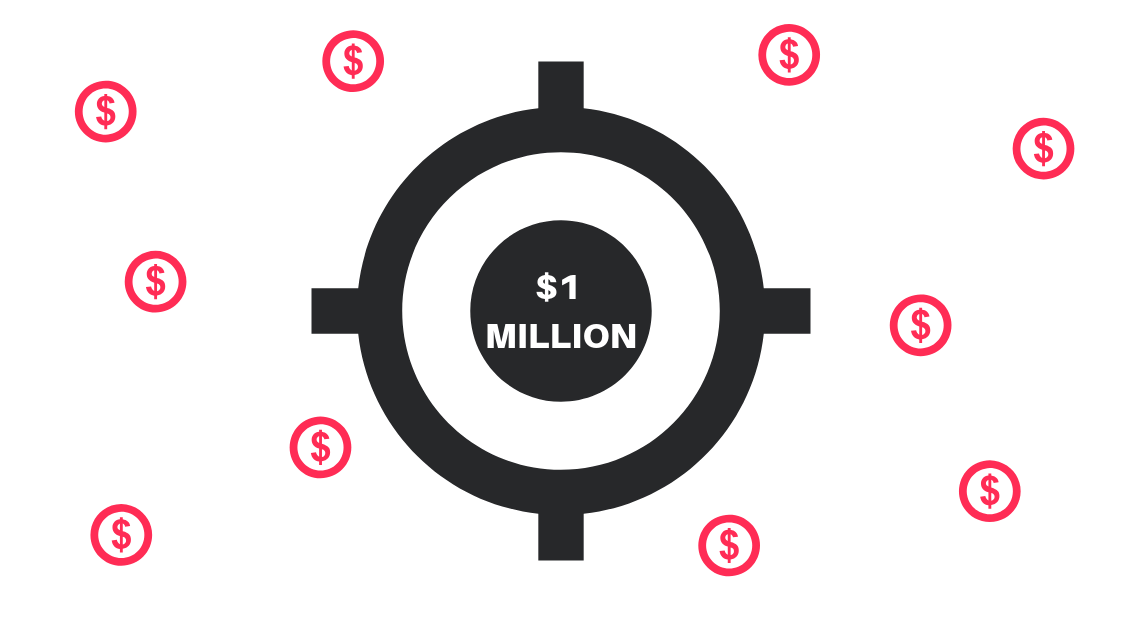 – Do you think that to support this large ARR you may need bigger team? Or your current staff is enough?

G: The current is enough, to be honest. We have automatized quite a lot of ongoing processes. I think it’s pretty much like an older mindset thing that your company is big if you have a lot of people. Or like someone telling me “yeah, we are 50, but the founder can’t even get us salary”. I say “it’s something wrong with that”. So, essentially our goal is to stay small and keep working smart instead of working with too many people and stuck.

– How do you motivate your staff? Is there any secrets to hire real professionals?

G: I think that the key is that everyone knows that we care. We care about your personal life and the way you are going within the company. Their learning, their personal growth. And we help them to grow personally. I spend a lot of time giving feedback to people. Another thing is that I don’t do micro-management. Initially, I was a bit too much micro-managing people. But very quickly, after two weeks or so, I’ve realized that I do something I shouldn’t do. So I switched my mindset to being much more like giving for each project and owner. As soon as I insist on owners doing their own mistakes, it all started working really well. And the results were amazing.

– How do you engage the best professionals in your team?

G: I think there are several things. We started branding from the very beginning, so we built like a community. We had a lot of videos, posting a lot. When it comes to the marketing and sales part we had people who wanted joining the company even before we started to hire.

Actually there was a situation:

A guy sent a really cool cold email to join a company. I never posted anything online. I didn’t want to hire anyone at that time. But his email was so good that we had a Skype-interview and then I was like “Alright, you seem to be a smart guy, so let’s start working together”. And then, step by step, he showed us that he is very smart. So we decided to hire him. When it comes to others, it was like meriting out potential balance, making them feel like we really care and want them to join the team. And I think that is also about having a branding that is really strong. The way we communicate, the content that we write are super-important and make people join our team.

– Do you still write content on your own or your staff does it?

G: I do write some content still. Obviously not all of it, because it cannot be possible.

G: I think there are two things I could advise. The first one is to be patient. I know we read a lot of articles that say “he became a millionaire overnight” or things like that. But it doesn’t work like that. If you think you will get rich after working a month building your company, just stop. The second advice is that dedication and doing things are much more important than thinking about “what’s next?”, “what’s my vision?” and so on.

All these things are important obviously. But, you know, there is too much talking about pitching an idea and saying “this is our vision”. This is bullshit. Yes, of course, it’s your vision at day one and you are setting something. Even though it is important to know where you want your company to go, your vision will keep changing. The more you do things, the more you put yourself out there, the bigger opportunities you will get. You need to be aware of your market and please your customers. And these things will bring your company to the next level.

– Thanks a lot for your advice. What do you think to be the next SaaS trend?

G: For SaaS company, it’s pretty difficult to know the trends. In the previous year, a lot of people were talking about automation, AI (artificial intelligence) or machine learning. This is going to be trendy and will always be trendy for sure. But what I can say is that when you see trends, make sure to go against them and do your own thing. Except you really like and believe the trend.

But what is the most important for us is building relationships with people and taking time to find out many things. And by doing so, we are connected emotionally with our customers at a higher speed than other companies. And that is what makes a difference for us. So always remember, whatever is the trend, you can always go against it.

G: For us – I think it just keeps doing the same thing. I think it’s about several things like emails, content and improves when it comes to SEO. I think we made one mistake not investing in SEO early enough. No matter what, I think that content is key. And to me, it is always about the mix between inbound and outbound. I love outbound and it works great. But you still need to do a little bit of inbound. So whenever people come and check up your website, they understand that you are a real person and that you do exist and do some interesting stuff.

– What do you consider to be a ratio between outreach and inbound?

G: To me, I think that 50/50 is enough. I think you should spend time writing. I suppose that inbounds can be divided into several channels like social and blogging SEO. 50% producing content and other 50% spending time reaching people.

How Much Does It Cost To Make A Website in 2022? Cost Breakdown

8 min read Guillaume Moubeche LinkedIn Founder & CEO at Lemlist – I know you were studying chemistry. How have you turned… 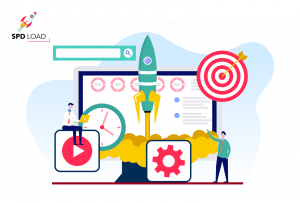 8 min read Guillaume Moubeche LinkedIn Founder & CEO at Lemlist – I know you were studying chemistry. How have you turned…