PoC vs Prototype vs MVP: A Complex View at Differences, Advantages, and Use Cases 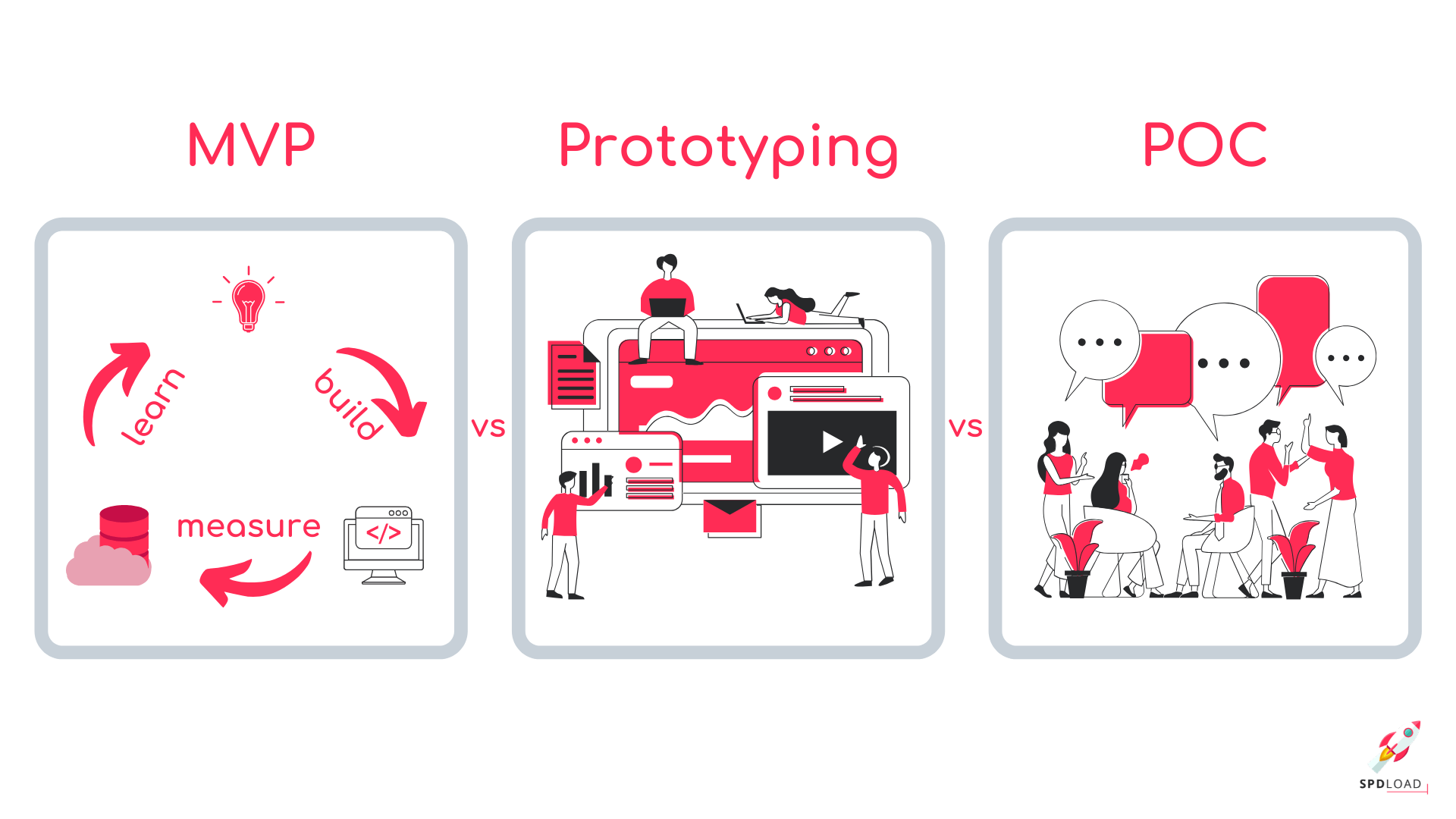 Such terms as POC, prototyping and MVP are rather widespread today.

But what do they stand for? How to use them in your business? How can they influence the process of development? And why are they always compared?

In this article I bring up the matter of these three strategies. I want to clarify the purposes of their usage and main differences.

What is a POC? POC is an acronym that stands for a proof of concept. It is a project implementation approach that helps to find out if the idea is feasible. A proof of concept in software development industry allows to confirm that the idea will function as designed. Startups may use POC as a financial viability aspect.

A proof of concept is not a simplified version of your product. It is a stand-alone project that only shows if your idea is possible to implement.

This strategy is not about identifying the idea market demand. It doesn’t expose the most efficient production process. A POC project covers only the technical capabilities of a project.

Each POC enables you to verify whether one of your tech assumptions, concepts, integrations etc. can be implemented. Thus, if you need to verify two technical aspects in different parts of your project, you will need two POCs.

A POC doesn’t presuppose a perfect development, because it isn’t likely to be reused. Its essential aspects are hard-coded data, mocked APIs, etc. You can neglect code quality, security and simplify the UI.

You should build up your POC project before prototyping and MVP development. A proof of concept methodology usually requires time and resources investment. But developing an unfeasible product always leads to much heavy expenses.

How Does a Proof of Concept Work?

If you are uncertain about idea feasibility, concept proofing has two possible answers for you ⁠— yes or no. A negative reply won’t let you go on with a potentially inviable project. If your idea has a positive proof of concept, you can continue to build your project.

Proof of concept process flow or results are not meant to be shown to your users. It is an internal approach to solve critical issues. But showing it to your potential investors, in turn, can become your benefit in raising a seed funding. Thus, you can show that you are a heavy hitter with a technically workable idea.

To know how a POC stage can improve your business, check the key features of the approach.

A POC has several main features. They are:

Main Reasons to Use Proof of Concept

Usually companies that use POC want to find out whether their idea is feasible. An innovative idea always creates uncertainty and, thus, may require testing. The same applied to developing a solution similar to an existing one at low cost. The competitors idea could have been implemented with higher investment than you have. That is why, it is better to use a POC approach to check your idea viability.

A concept proofing is not a necessary part of a development process. Still, I recommend it in case you have technical points that need to be solved beforehand.

Once you get a positive results of the proof of the concept, you can start prototyping.

Prototyping definition in software engineering refers to the strategy that allows to see how the product will look like after developing.

If a POC is about technical part, a prototyping deals with UI/UX. It allows to visualize the way the end-user will interact with your product. A purpose of prototype is to make you understand the project workflows and define which features to include in it.

Prototype development process lies in designing a set of web or app screens to make up a model of your product. It exposes the errors in study and designing.

Prototyping is about developing an early model of a product that can be tested and reworked until the expected results are achieved. As well as a POC, prototyping has a short lifecycle.

How does a Prototyping Work?

How to build a product prototype? A product owner defines all system requirements to create a preliminary simplified design. Then, the first prototype is developed and tested. Once the main errors and strong points are identified, the developer evaluates feedback. It is time to decide on what should be added and removed.

Each new prototype leads to the developing of a new system. The following system development is iterated until its final version meets all the requirements and user satisfaction.

This approach is the most widespread. However, the process flow may be altered in accordance with the chosen prototyping type. 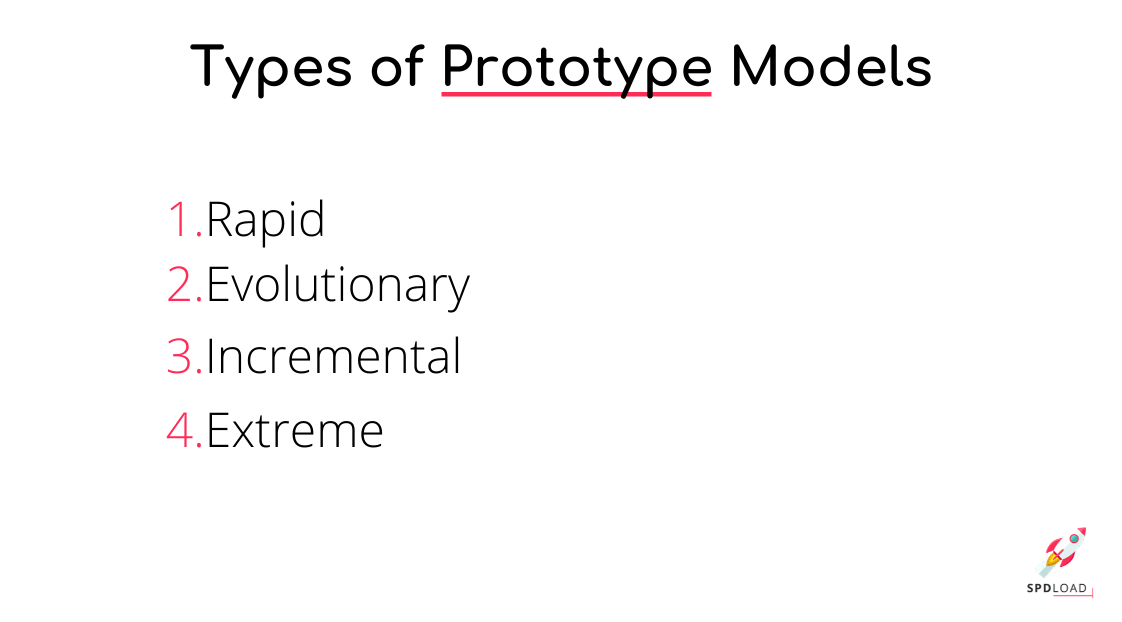 There are four prototyping model types:

What does prototype stand out for? Here are its main features:

Main Reasons to Use Prototypes

A prototype product development can become particularly useful. Especially in case some project requirements still lack in details. You can create mockup screens to see and feel how your product will look like. The main benefits of prototyping lie in an opportunity to interact with users and have their early feedback. An improved and revised prototype that corresponds to the user needs is the best way to start your MVP.

What does MVP mean? An MVP term stands for a minimum viable product. An MVP version has enough features to convey its idea to the early customers and solve their problem.

Unlike POC or prototype, an MVP is a functional product that has a minimum set of features to satisfy the needs of its initial users. An MVP lets you find out how your customers would accept your product. What is the point in wasting money and resources on something they aren’t interested in or don’t need?

Your MVP should include only the features that make your solution valuable for the customers. And the only question an MVP raises is “Will users pay for my product?”

Unfortunately, unlike with a POC, the answer is usually not as plain as “yes” or “no”. An MVP gives a room for learning, enhancing and analyzing.

An MVP gives a clue how to develop a good enough product in a short space of time. It is not a full-scale product, but is a helpful approach to test your product in the market.

On the one hand, you spend less money than if you were developing a final product. On the other hand, you get a feedback, understand the demand and can finally start defining your business model. No drawbacks, no blind spots.

An MVP stage once was used by such famous companies as Uber, AirBnb and DropBox. An MVP is not about making an inferior product. It is about allowing users to bite off your product and let them decide whether they want to swallow it.

Main Features of an MVP

Main Reasons to Use MVP

Entrepreneurs rarely like talking about failures, but, we witness them once in a while. The reasons for that may vary. But the fact is, if my product is bound to fail, I want to know it as soon as possible. And that is the first reason I always prefer to choose an MVP way.

An MVP is the fastest and most reliable way to give target audience a solution for its problem. 42% of projects with an innovative idea fail because of the long development time. It happens because they don’t launch an MVP and don’t get a potential client’s feedback.

If people don’t like the solution, an MVP is a quickest way to know it and save resources. In case they are ready to pay for it, an MVP makes it possible to choose the right direction to extend.

MVP vs Prototyping vs POC: What to Choose

The difference among these three strategies has become clearer. But there is still a room for a user guide.

There is no need to decide on the strategy right now. Let’s take a break for a moment and think about what we’ve got by now. Here are the main points you need to know for sure before starting to choose a strategy:

If there is an unsolved issue in this list, take your time to clarify it.

Comparison: MVP vs Prototype vs Proof of Concept

Three considered strategies have not only different purposes, but different parameters. Here is a clear illustration:

MVP vs Prototype vs POC: Make Your Choice

MVP, prototyping and POC are the strategies that can be applied in sequence. But a product owner may not want to use them all or experience lack in resources. That is why, I’ve made a list of preconditions that will help you to choose.

The One But Not the Same

As you can see, the POC, prototyping and MVP strategies can be used solemnly and together. They have different purposes and are applied at different stages of development. Thus, they are not interchangeable. 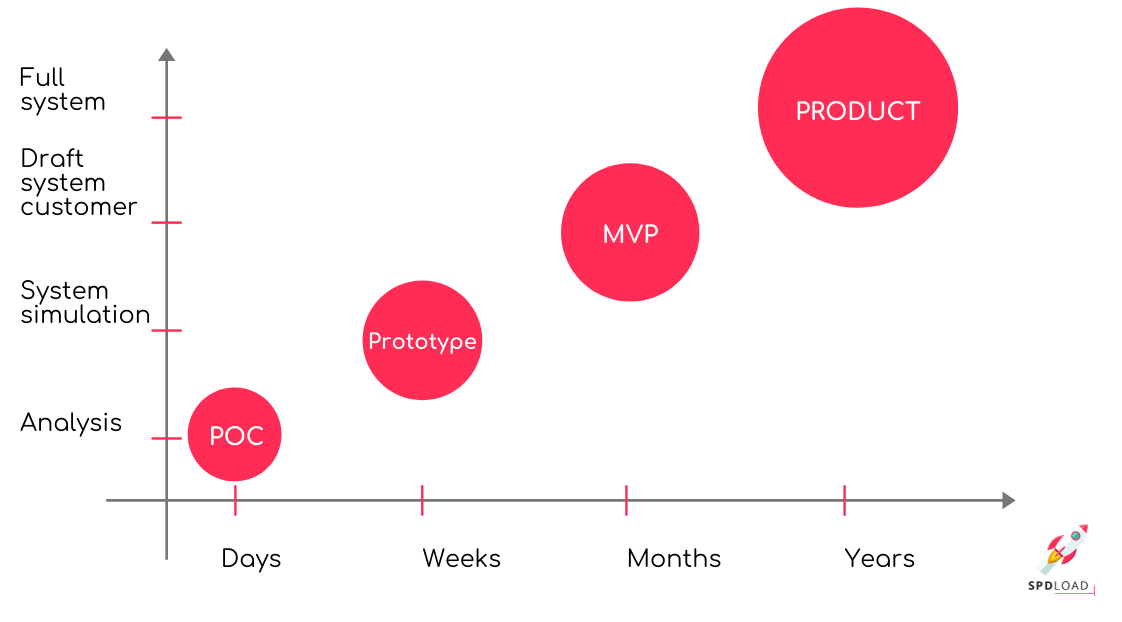 Proof of Concept vs Prototype vs MVP

Of these three, only an MVP is a functional product. But it doesn’t mean that two other strategies doesn’t influence an MVP or full-stack development.

If you have an idea, especially an innovative one, a POC is there to help you in finding out whether you can technically implement it. Without a POC, the development of a product is like taking a wild guess and win.

Prototyping is more about having not only a vision, but an ability to feel your product. If you have enough resources, you can build up a UI design during the prototyping process. Later you can use it in development.

You can use these strategies stage-by-stage, right after your idea validation. Otherwise, you can implement in your development, proceeding from your purposes.

Discovery Phase of the Project

Talk to us and we will help you to conduct the discovery phase properly. It helps to identify core competitors, create a marketing strategy, and UX prototypes at extremely low cost. FREE estimation of your project included!

Take a look at Discovery Stage 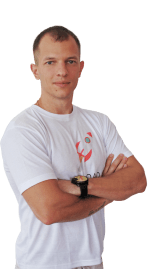 Find out how to test your business idea 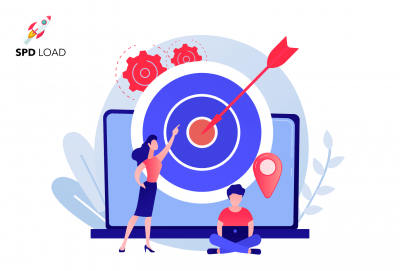