The In-Depth Guide on Video Streaming Protocols: A to Z 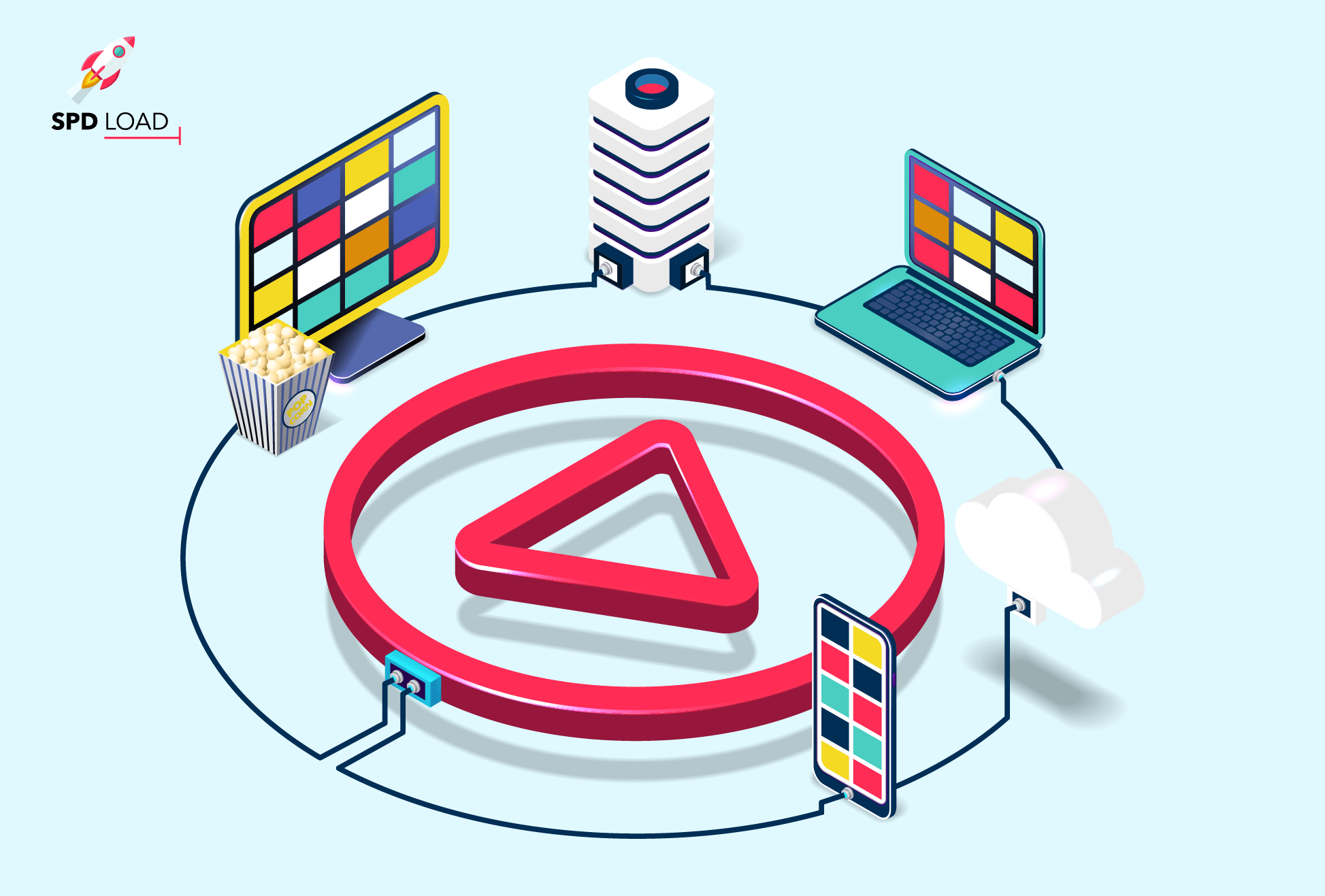 Video streaming is one of the most trending concepts in the current time. As per statistics, video streaming is expected to account for 82% of internet traffic in 2020. The core reason behind this is the availability of smartphones. Currently, there are around 3.5 billion users that own a smartphone around the world.

As most of the viewing of video content happens on smart devices, this era has seen an elevating development in technology. Apart from the video quality enhancements, one of the key developments that also forms the foundation of streaming is video streaming protocols.

There is much more to uncover regarding the protocols of video streaming. Just hold your horses as in the coming sections, we are going to take a comprehensive look at all the aspects related to streaming technologies. Let’s begin!

What Is the Streaming Protocol?

Now is the time to answer the most anticipated question. But before that, let us see what a protocol means.

The contents of a communication technologies are:

There are different types of protocols based on the type of application. Some of the major networking protocols are:

How to Use Protocols in Live Video Streaming Apps?

The basic definition of a streaming protocol is an entity that is used to deliver data over the internet, no matter the streaming types, audio, or video.

On the other hand, a video stream protocol is a standardized method of delivering video content to the users. In case of video, the stream is broken into small chunks and transferred over the network. On the receiver’s side, it is reassembled into one piece and fed to the user.

The video streaming protocols can be in the following three layers of the network:

The placement of the streaming frameworks varies based on their type. Video delivery does not just rely on one type of protocol; there are various aspects in a video that depend on different protocols like:

The use of TCP protocol makes the data transmission easy and secure as it involves a three-way handshake while transmitting data.

What Isn’t the Streaming Protocol for Video?

Now, there are some of us who would be a bit confused about the concept of video streaming protocol. In this segment of the article, we will take a comprehensive look into that and other aspects that may or might have confused you.

First off, the technologies of video streaming are mostly confused with codecs and container formats. It is crucial to know that there is a significant difference between the three. The following section will explain them in detail.

Yes, both of the Codecs and Streaming Frameworks are used in the online streaming world for various streaming types. But they are not the same. If we go by general definition, you already know what a video streaming protocol is.

A video codec is expanded as a coder and decoder; it is a tool that is used to make video files smaller than the recorded files.

If you are a smartphone user, you might have observed that the videos recorded by your smartphone are pretty big in size. And the same goes for the pictures. Take an example of a video that has a frame rate of 24fps. If we assume that each picture is of 1.5 Mb, the video’s size will be remarkably high.

This will lead to the requirement of more storage space on the server and, consequently, more cost. This is where the video codec is advantageous. The codec compresses the video data to reduce the video’s size and, thus, saves space.

Now, you must be wondering, how does it happen? The detailed process is a bit complicated, but here is a simple example of it. If one of the sections stays black for some time in a video, the codec will remove that section while keeping a reference to it.

This is how codecs vary with respect to the video stream protocols.

Another aspect of video streaming that is mostly misunderstood is the container format. It actually acts as a container or a package that is used for transmission of the video content.

Now, the streaming protocol and the container format may seem similar, but they are not. The basic difference is:

Another thing about the container format is that it defines how content is stored inside the chunks. The data is arranged the way it will stream.

Some of the common container formats are:

So, this is the difference between a streaming protocol, container format, and a codec.

Here is a classic example to understand it better. If you are a seller of fabrics, the machine you use to compress the fabrics is the codec. The container in which you pack your fabrics for transfer is the container format. Lastly, the medium used for transfer like the vehicle, its driver, etc. act as the streaming protocol. 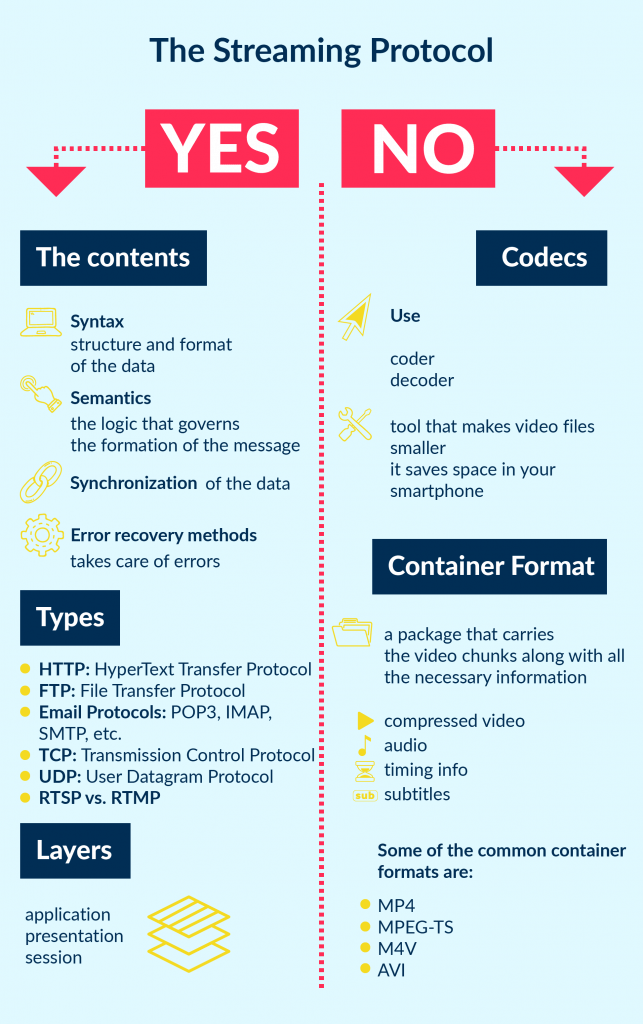 A Brief Overview of the Best Streaming Protocols

Now, as you know what a streaming protocol is, we can now move on to the discussion of some of the best streaming frameworks. A number of video streaming protocols have been developed with time for various different purposes and unique features. Let’s take a look at them.

Some of the Traditional Video Streaming Protocols

RTSP is another traditional video stream protocol that is a bit different from RTMP.

These two were the traditional streaming types. It is obvious to figure out that the described protocols for video streams have some drawbacks. These drawbacks make them fit for some applications, but not all of them. If we contrast RTMP vs. RTSP, there are little differences that are solved by new frameworks.

As the comparison of RTSP vs. RTMP poses some cons with the traditional technologies, the new streaming protocols of video are a bit advanced and cover up the drawbacks of the traditional ones. 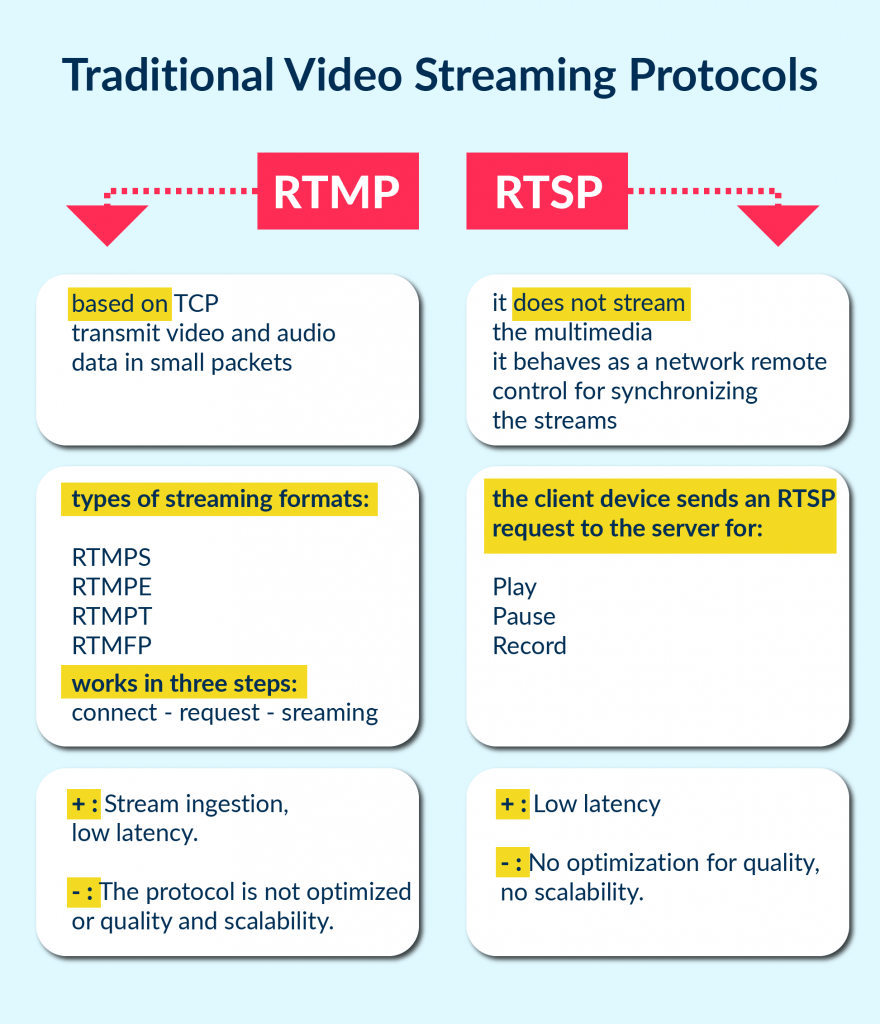 The HTTP based technologies are a bit different than the traditional video stream protocols.

The traditional protocols follow the process of streaming the content directly with a bit of lag of time. But, the HTTP based frameworks work differently. These types of streaming protocols use the regular web servers to send out progressive downloads of the stream.

The HTTP streaming types protocols are better than RTMP and RTSP as they offer the users superior video quality, no matter the device or network connection. Here are some of those protocols in detail. 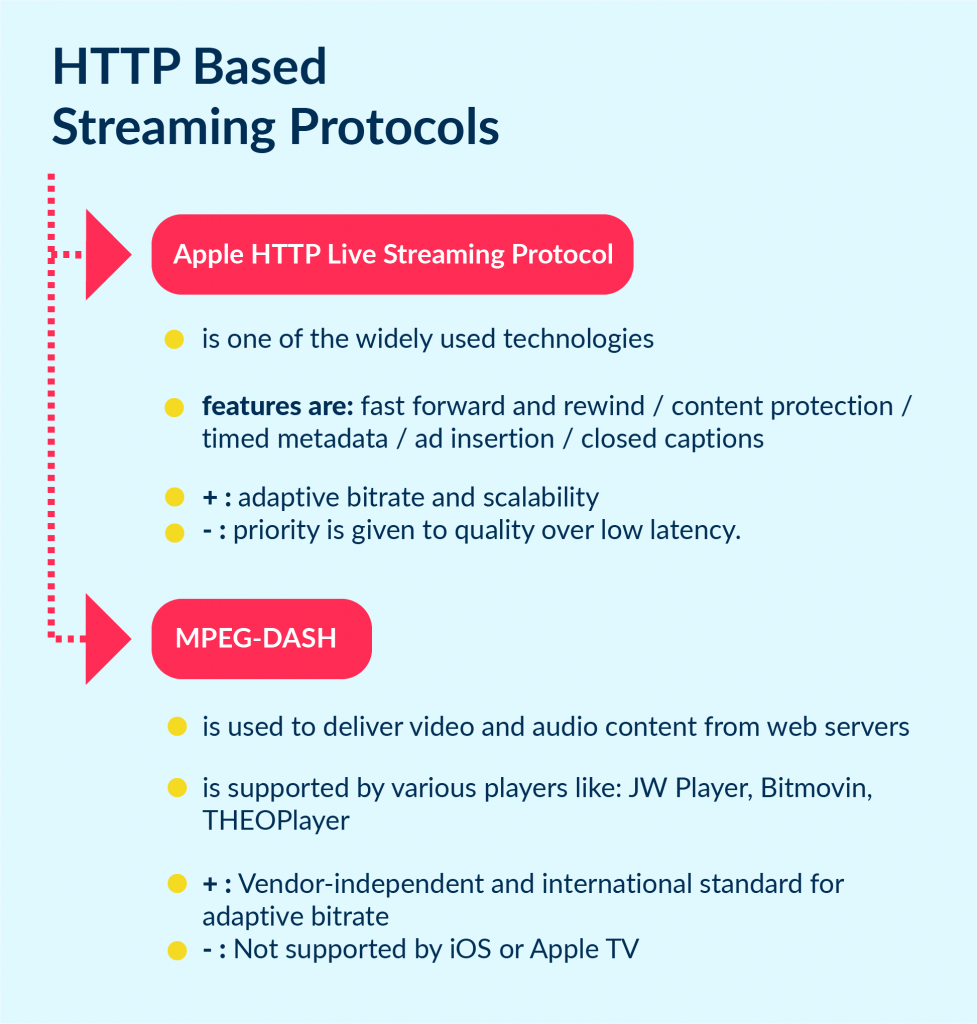 These were the HTTP based video streaming protocols. The major advantage that these have over traditional protocols like RTMP and RTSP is the video quality. Although RTSP and RTMP offer low latency video content, some of the advanced protocols like Adobe HDS have both types of streaming features. 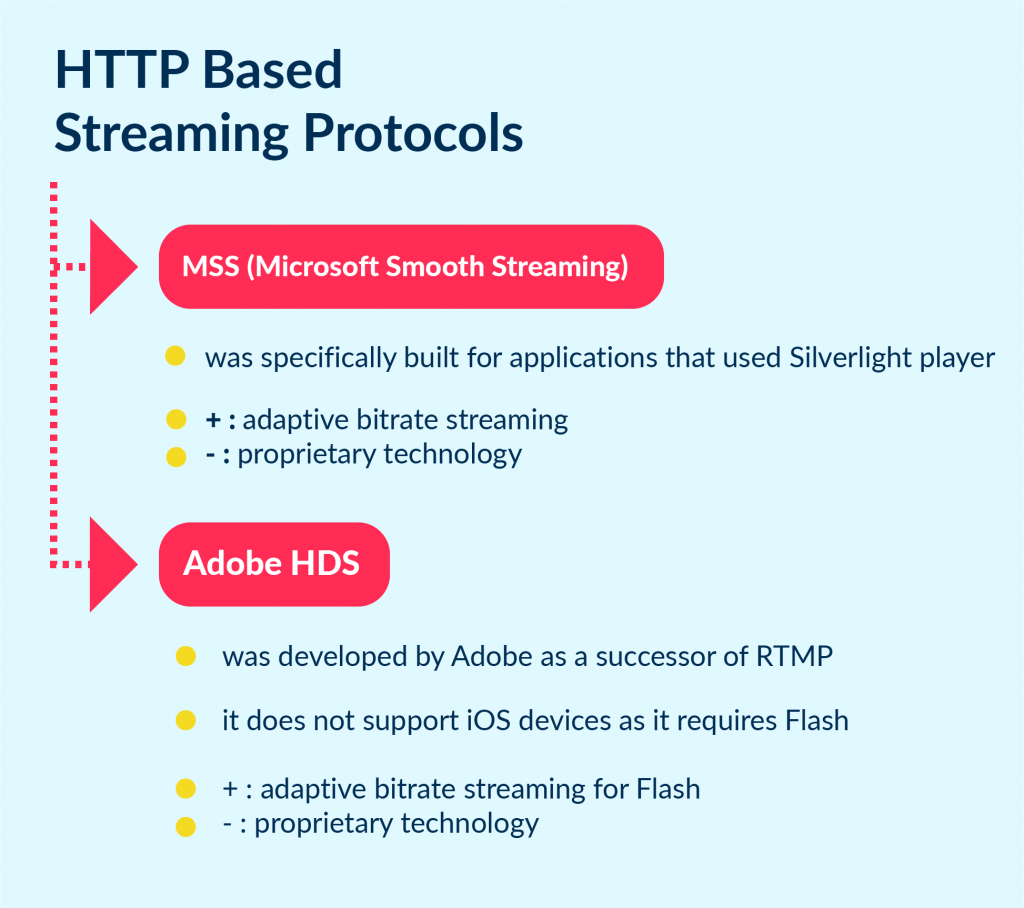 How to Choose the Video Stream Protocol?

Well, if you’re thinking of making a video streaming app or any other app that involves the sharing of video content, it is important for you to analyze some crucial factors before making a choice. Moreover, you can also study some of the latest protocols in the market.

One of the latest and popular video stream protocols is WebRTC. Let us take a look at that:

Moreover, it is also essential to check that the type of streaming protocol you use is compatible with the media streaming formats and projects. We at Spdload use Janus and Jitsi for building and deploying video conferencing solutions.

It is a collection of open-source projects that are useful in building video conferencing solutions. It is widely used because of its numerous benefits. Some of the crucial ones are:

The best thing about Jitsi is that it is compatible with WebRTC protocol.

Unlike Jitsi, which is used to build simple solutions, Janus is a WebRTC server used to build complex solutions. Moreover, it is also used for setting up WebRTC media communication with the browsers, no matter if it is Chrome, Safari, or Firefox.

So, to make an awesome video streaming app for various streaming types, you can harness these two tools.

How to Use Protocols in Netflix-like Platform?

Factors to consider while choosing the right protocol?

Although there are various types of streaming protocols, they can vary based on the type of app you are developing. So, you need to be certain that you choose the right one.

While making your final choice, keep in mind the following factors: 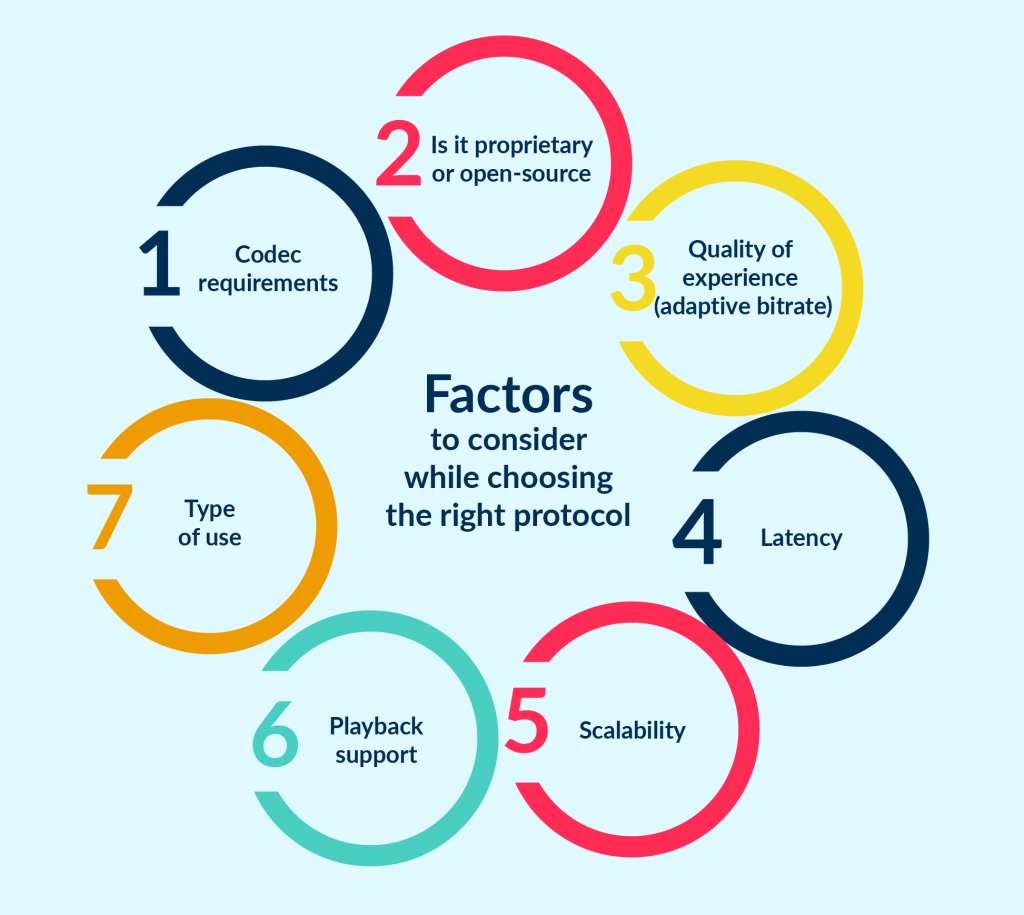 Want to Build Your Own Live Streaming App?

Well, well, well, here we are in the final section of the article. If you are thinking of building a video streaming app, it is essential for you to consider all the essential factors including, protocols that you can use.

As explained above, there are many of them like RTMP, RTSP, HDS, MPEG, and more. You can choose any of it based on your preference and app requirement. Yet we highly recommend taking a closer look at Jitsy and Janus.

Moreover, you will also need to get in touch with a professional agency that provides app building services.

We at Spdload offer all-round services right from wireframing of the app, helping you choose the right protocol, to post-release services, and others. For reference of our quality work, check out the video streaming app for the security domain that we developed.

You can also learn about developing a full-fledged video streaming app here.

Find out project roadmap, list of core features, and detailed estimation of your own platform

In the digital world where every brand needs to have an online presence in order to maximize its marketing, sales, and growth…

How Much Does it Cost to Develop a Web App?[Actionable Edition]

Almost all of us have used Google Docs, Amazon, and Facebook, right! But only a few of us know that these are…

You are planning to move your physical business online. But like most people, you don’t know where to start from? Well, we…

94% of first impressions are due to web designs. So, you need to have an aesthetically pleasing website that arrests the attention…

How to Design a Healthcare Website [in Conversion-Driven Way]

Let us begin with some fresh stats! 5% of searches are health-related on Google 80% of adult internet users have looked for…

Everyone has a motive of accomplishing their dream as early as possible in life. If you want to accomplish your goal faster,…

How Much Does It Cost to Design a Website? [Overview]

The Complete Guide in Banking App Development [for Early Stage]

The rise of digital devices has made everything easily accessible for us, even your bank. Today, there is no need to go…

The global pandemic has made healthcare the most sought-after service. Yet, it remains inaccessible to many. Most people stay afar due to…